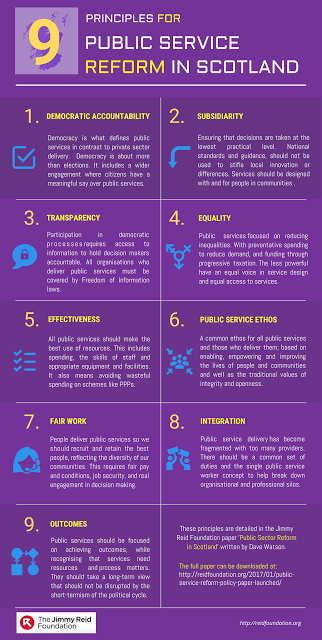 In a  detailed policy paper, Dave Watson, of UNISON Scotland, argues that the financial and other pressures on Scotland’s public services are driving an agenda of piecemeal public service reform.

Five years after the Christie Commission set out the principles of a particularly Scottish approach, it is time to take a holistic look at the next stage of reform. Dave Watson’s paper for the Reid Foundation examines the context and development of public service reform in Scotland and analyses the approaches of the current government and those who advocate other reforms. The paper makes the case for change that recognises the value of public services to the economy and society generally.

It argues for the delivery of integrated public services built around recognisable communities, whose primary focus is to challenge the underlying inequalities that blight our country and waste public resources, generation after generation. Services should be delivered at the lowest practical level, allowing staff and citizens to design services in a way that best meets the needs of their communities.

The role of central government should be to set the strategic direction based on outcomes – rather than trying to direct services from Edinburgh. However, the paper recognises that a country the size of Scotland cannot justify duplication and difference for the sake of it. It makes the case for public service frameworks that allow local services to focus on what matters to achieve positive outcomes.

This paper attempts to break out of the sterile centralism v localism debate, with a different approach. It offers a co-operative more equal Scotland, rather than one left to the vagaries of the market.

Read the paper in full Public Service Reform by DaveWatson