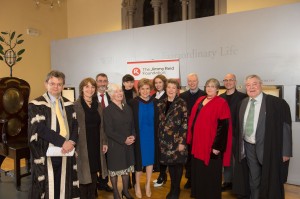 24th November in the Bute Hall, University of Glasgow

The Lecture took place against a backdrop of engineered uncertainty on the status of trade unions and fundamental human rights in the UK: the Trade Union Bill is currently being debated at the UK parliament and its provisions seek to weaken the ability of trade unions to represent their members; the UK government wants to change the mechanism to define and protect human rights and is about to publish proposals to abolish the Human Rights Act and introduce a Bill of Rights.  These developments are opposed by the Scottish Parliament.

A video which explains the issues can be found at https://youtu.be/lyPx84fiADQ

The meeting was chaired by Grahame Smith, General Secretary of the STUC.   The Lecture honours workers’ leader Jimmy Reid, who delivered his inaugural address as rector of Glasgow University in the Bute Hall on 28th April 1972.   Jimmy delivered his famous “The rat race is for rats” speech.  His archives and those of the UCS Work-in are maintained by the University and some were on display prior to the Lecture.

‘We welcome the First Minister’s criticism of the Trade Union Bill and the actions she proposes the Scottish Government will take to blunt its impact when it becomes law.

However, and notwithstanding employment issues remain reserved matters, we urge the First Minister and the Scottish Government to go further by using their existing powers to provide regulatory underpinning to worker participation so that workers have influence over the way their workplaces are run. This could be done through public procurement and in the public sector.

It would then mean Scotland’s economy moves closer to the First Minister’s goal of emulating the Rhineland model of regulation – which still remains the most successful economic and social model in Europe.   This would be the most fitting way to honour the legacy of Jimmy Reid.’