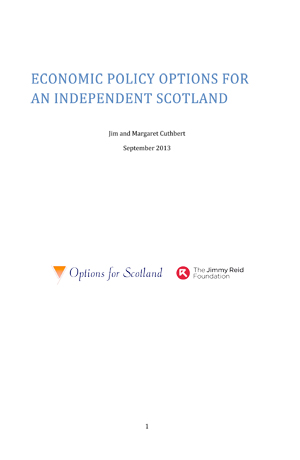 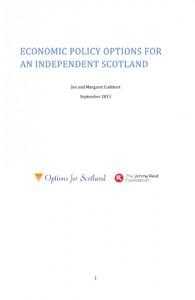 This paper has been produced as a joint exercise between Options for Scotland, and the Jimmy Reid Foundation. It is designed to take a radical look at the type of economic policy options which would be open to an independent Scottish government. It does not make any assumptions about what the political stance of a post-independence Scottish government would be: but the approach is consistent with the Jimmy Reid Foundation concept of the Common Weal.

There are many, many countries, with less resources than Scotland, who survive comfortably as independent nations. We therefore take the viability of an independent Scotland as a given. What we are going to be showing here is how the major economic levers in the UK are at present being operated in a way which is very sub-optimal for the social and economic well being of Scotland: and what positive steps Scotland could take to redress this situation using the powers open to it under independence. However, as the paper explains, it is not an attempt to set out an economic blueprint.

The specific areas dealt with in Section 1 are as follows:

Monetary Policy: the key decision is whether Scotland should move towards its own currency.
Fiscal Policy: the paper identifies ten specific failings in the UK operation of fiscal policy.
Natural Resources: how should Scotland achieve effective control of its own resources, so that a greater share of the benefits comes to Scotland.
Whisky: similar issues arise as in natural resources.
Utility Pricing: Scotland has the opportunity to correct the current flawed, and unduly expensive, UK approach.
Competition Policy: how to make Scottish firms less vulnerable to being taken over.
Procurement Policy: more can be done to make the £11 billion programme of public procurement a driver of a knowledge economy.
Research and Development: how to improve Scotland’s weak record on business research and development, particularly using the strengths of its academic sector.
Industrial Policy and Enterprise: there is much to be gained (i) from properly integrating those aspects of policy which are currently awkwardly split between reserved and devolved responsibilities, and (ii) from moving towards a more balanced economy.
Higher Education: there needs to be a review of priorities and structure.
Social Security: current UK policies could be liberalised.
Financial Sector Regulation and Stability: there are advantages to an independent Scottish approach – but also difficult transitional issues.
Employment Policy: there is much to be gained from reversing the current trend of regarding employees primarily as commodities.
Skills for Young People: options for improving young people’s opportunities in the labour market.
The second section of the paper explains why this does not amount to an economic blueprint for an independent Scotland. First of all, because the path of future economic strategy depends on a number of choices about the type of society and economy which Scotland hopes to foster: these choices should properly be taken by the Scottish people and government, and it is not for us to pre-empt this process. Secondly, because future economic policy will inevitably be bound by a number of constraints: some of these constraints will themselves be determined by decisions made in the process of achieving independence, and are therefore currently unknown. And finally, because a major factor influencing economic policy will be events in the wider world – particularly the way in which the currently unfolding crises in the world, European, and UK economies play out.

In the final section we draw some important conclusions both about the way in which economic policy in Scotland should be developed: and about the path to independence itself. In particular:

1) Fundamental to all economic policy making by an independent Scotland would be basic decisions about what sort of society and economy we want to achieve.

2) Scotland has to be very careful that in negotiating its relations with bodies like the rest of the UK and the EU, it does not make concessions which will impose constraints which ultimately prove to be crippling. Any choices, for example, about forming a Sterling currency union with the rest of the UK would have to be viewed very carefully in this respect.

3) An independent Scotland is going to have to have the will and courage to deal with some of the other constraints it will face. In particular, it will have important choices to make about how it is to ensure that Scotland gets a fair share of the benefit from its natural and other resources.

4) Scotland will have to be pragmatic and opportunistic about how it responds to the uncertain course of world economic events. In particular, it will wish to avoid the risk of being damaged by any potential crisis in the rest of the UK, while being able to respond to possible opportunities, for example, for easing the transition to an independent currency.