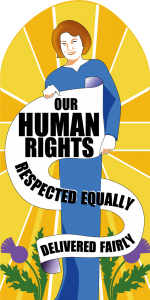 Today the Jimmy Reid Foundation publishes a new policy paper on why Scotland must do better to respect, protect and fulfil human rights across devolved functions.  Publication coincides with Alex Neil, Cabinet Secretary for Social Justice, Communities and Pensioners’ Rights giving evidence to the European and External Relations Committee of the Scottish Parliament as it concludes its ‘Human Rights Inquiry’.

Human rights are under attack from the UK Government which is threatening to abolish the Human Rights Act (HRA), possibly withdraw from the European Convention on Human Rights (ECHR) and introduce a British Bill of Rights.  Although the Scottish Government explicitly supports the HRA and the ECHR, the real problem remains the failure of ‘duty bearers’ ie the public sector and those providing services of a public nature, to comply with existing human rights obligations.  Fixing that problem should occupy the political energy and practical action of our elected politicians with a consequent gain of the public understanding that human rights are relevant and powerful in making our lives better, and Scotland fairer.   A YouGov poll for the Scottish Government in 2015 confirmed the difficulties in perception with one in five Scots saying human rights are for minority groups only and two in five Scots saying they have no bearing on their everyday life.

Carole Ewart who wrote the Paper pointed out that

“Applying human rights equally and fairly can address urgent issues including poverty, poor care for elderly people and unfair employment practices.  Scotland must now take deliberate, concrete and measurable steps to comply with existing human rights law, address the reputational damage which has led to people regarding human rights as weak, owned by a minority and of little relevance, and focus on enforcement action which makes Scotland a model of best practice.

“Although human rights are to be included in the National Performance Framework, there is a fear that it will fail to deliver a prompt impact, and promises to consult on extending out list of human rights will serve as a distraction from the main problem of delivery and delay positive action further.”

The paper argues that in the longer term consulting the people of Scotland on what further rights they would like to see enforceable in domestic courts in very welcome particularly on economic and social rights.  Thus far a Bill of Rights has been hijacked as a tactic to constrain human rights by the UK Government whereas in other countries a Bill of Rights is regarded as a positive vehicle to mainstream and enforce human rights and we can learn from such experiences eg from the State of Victoria in Australia.  The paper concludes with four recommendations which can be enacted now and after the May Holyrood elections:

1. The Scottish Government should entrench its commitment to human rights by proactively ensuring that our 10,000 + public services in Scotland fulfil their existing obligations to comply with the ECHR as well as international law. The model of the Charter of Rights in the State of Victoria, Australia, should be considered.

2. The Scottish Parliament should entrench its commitment to human rights by setting up a Human Rights Committee to provide scrutiny of all Bills, inquiries etc. and ensures a focus on the impact on our human rights.  In particular the current human rights inquiry being undertaken by the European and External Affairs Committee should focus on duty bearers’ compliance with existing human rights obligations which are 18 years old.

3. The Scottish Human Rights Commission (SHRC) consulted on, designed and established the framework for Scotland’s National Action Plan on Human Rights (SNAP).  Whilst a welcome development, and after two years of delivery, it is time to change the delivery mode from persuasive to compulsion supported by funding.

4. The Scottish Parliament elections in May 2016 provide an excellent opportunity to focus on human rights delivery in Scotland with each party setting out specific commitments in its manifesto.  Those commitments should include: agreement to improve human rights protection regardless of what the UK government decides on the future of the Human Rights Act and the European Convention on Human Rights; a public consultation on what human rights should be added to those which are currently enforceable in Scottish domestic courts; as a priority in May 2016, the elected Scottish government should require public authorities in Scotland to explicitly promote and comply with existing human rights law via regulations or legislation.

The agenda and papers for the European and External Relations Committee meeting on 3rd March can be found at http://www.scottish.parliament.uk/S4_EuropeanandExternalRelationsCommittee/Meeting%20Papers/EERC_Public_papers_3_March_2016.pdf